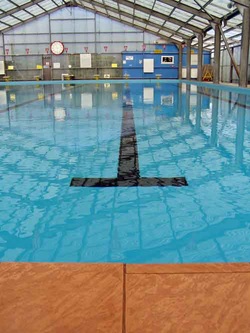 History
The Westport Swimming Pool on Brougham Street, Westport was built in the late 1800's and was
built with concrete.
Inspections revealed that the concrete walls and floor were in a poor condition and was leaking water.
This leakage was causing problems with the pool paint system which required on-going maintenance.
Council decided that Westport needed a new swimming pool, but needed
to extend the life of the existing pool in the interim.


In mid 2006 Council accepted a tender from WekaStitch to reline the
pool with EVA foam and PVC  liner to extend the life for approximately 3
years until the new pool was constructed. The contract was completed in
October 2006 and the new pool was opened in April 2009.


The Aqualyne liner remained in excellent condition up to the demolition of the pool in February 2010
and showed no sign of failure.
Although Council's aim was only to extend the life of the pool for a short 3 year period,
I have no doubt that the liner would have lasted for a many years and proved to be an excellent solution.